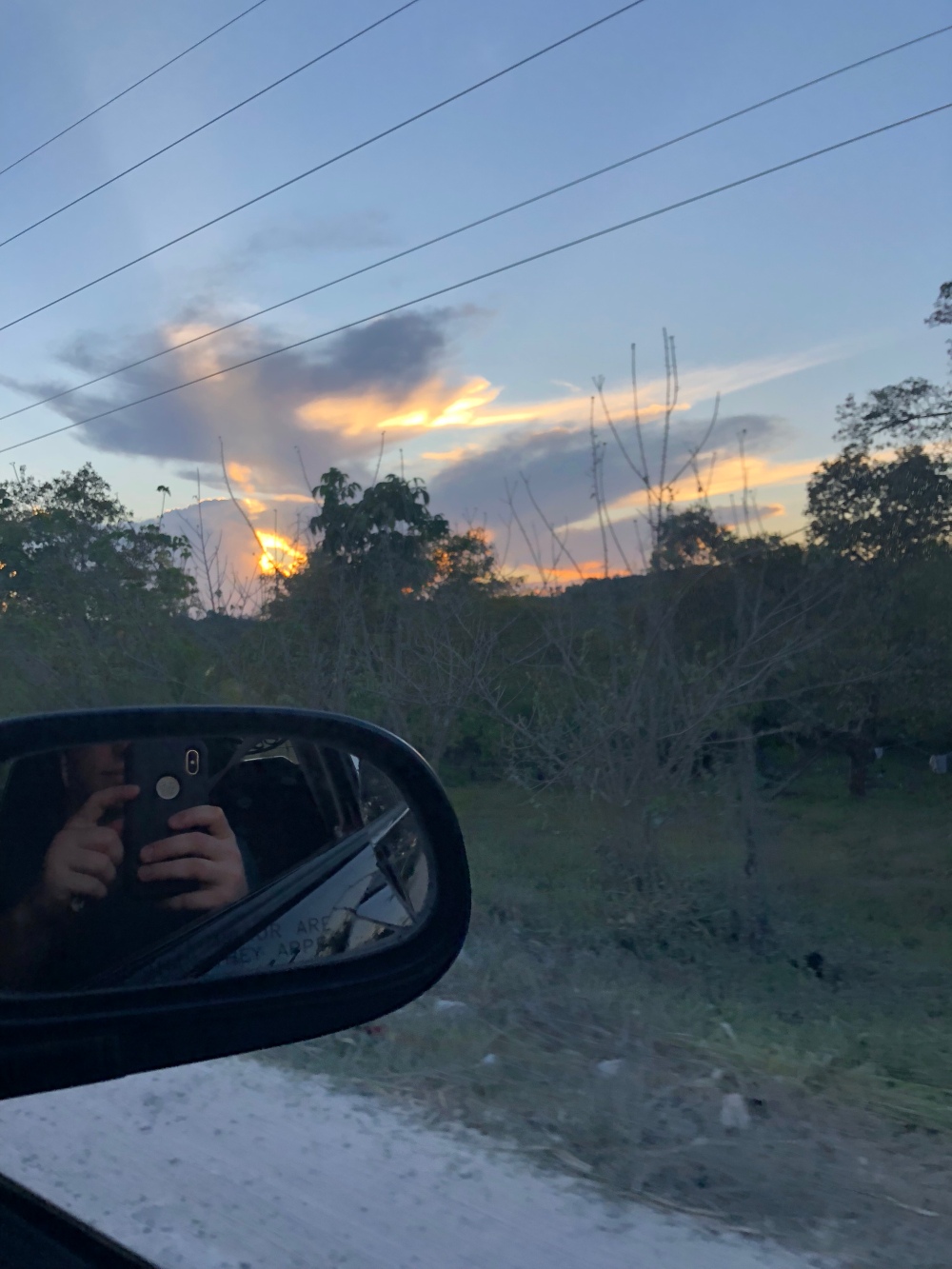 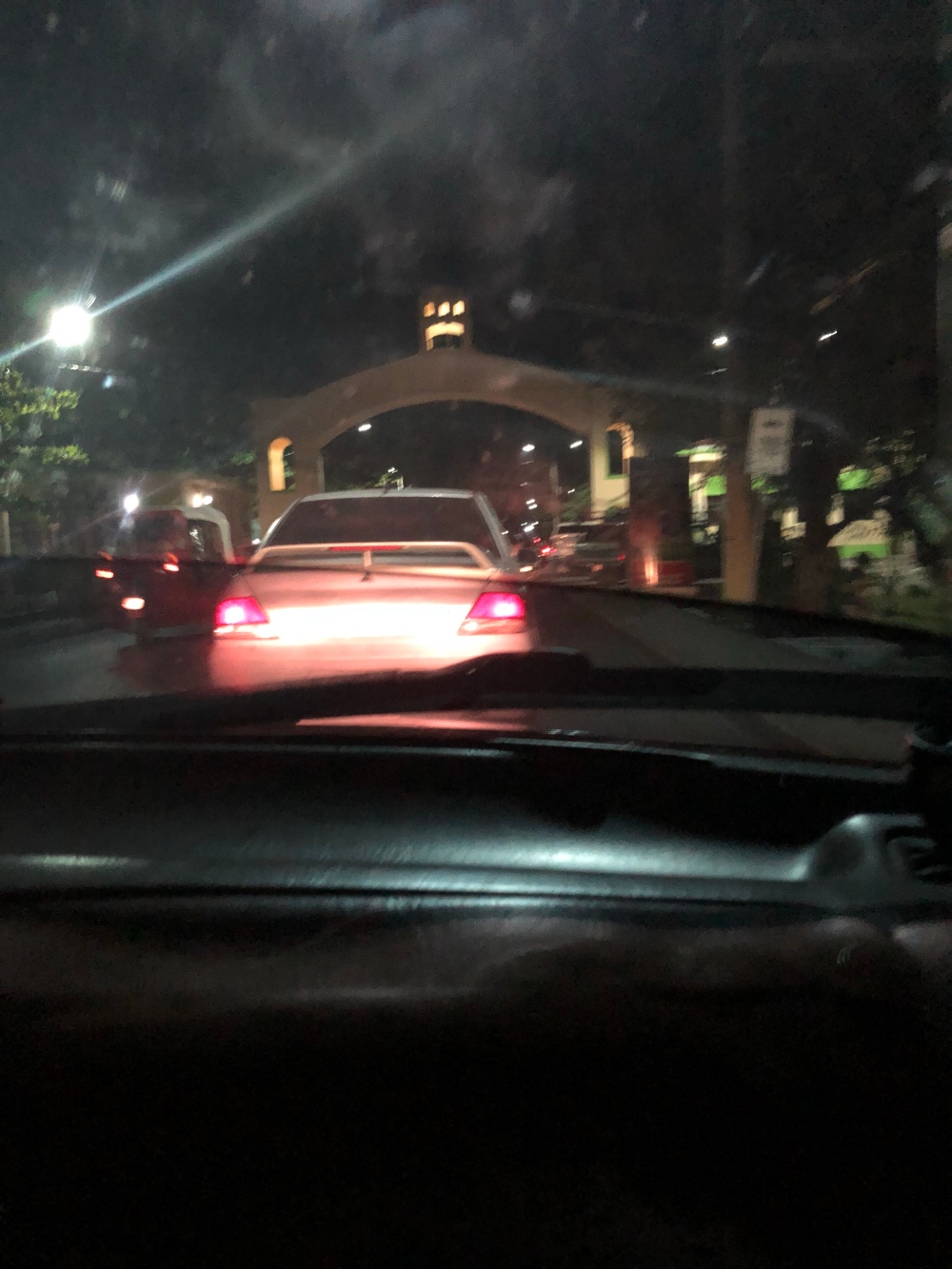 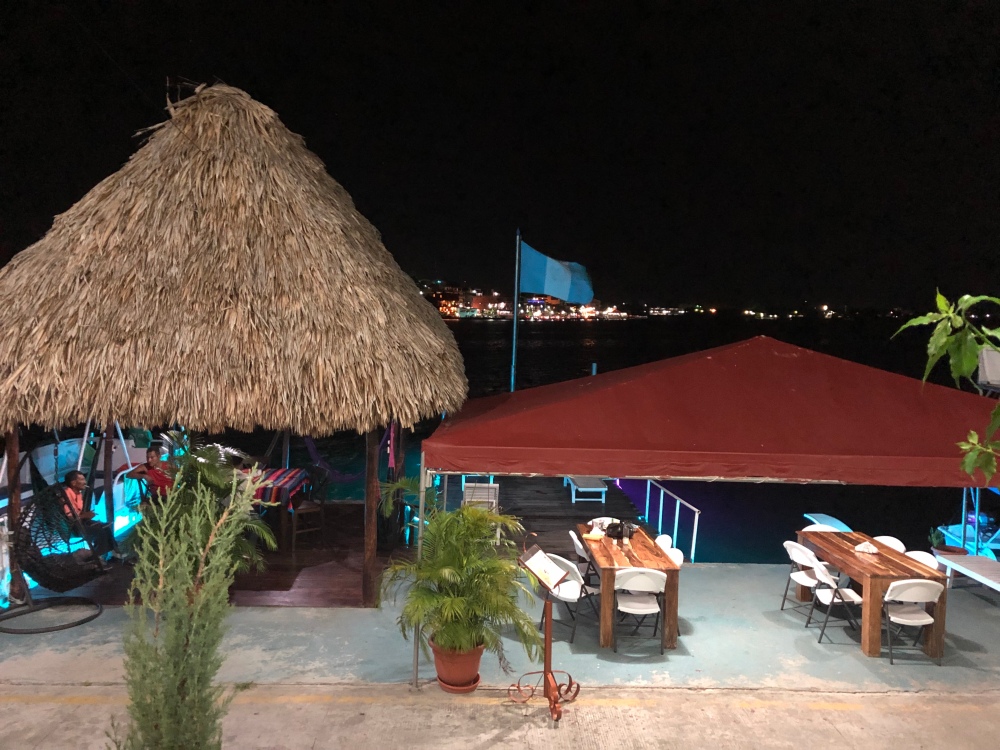 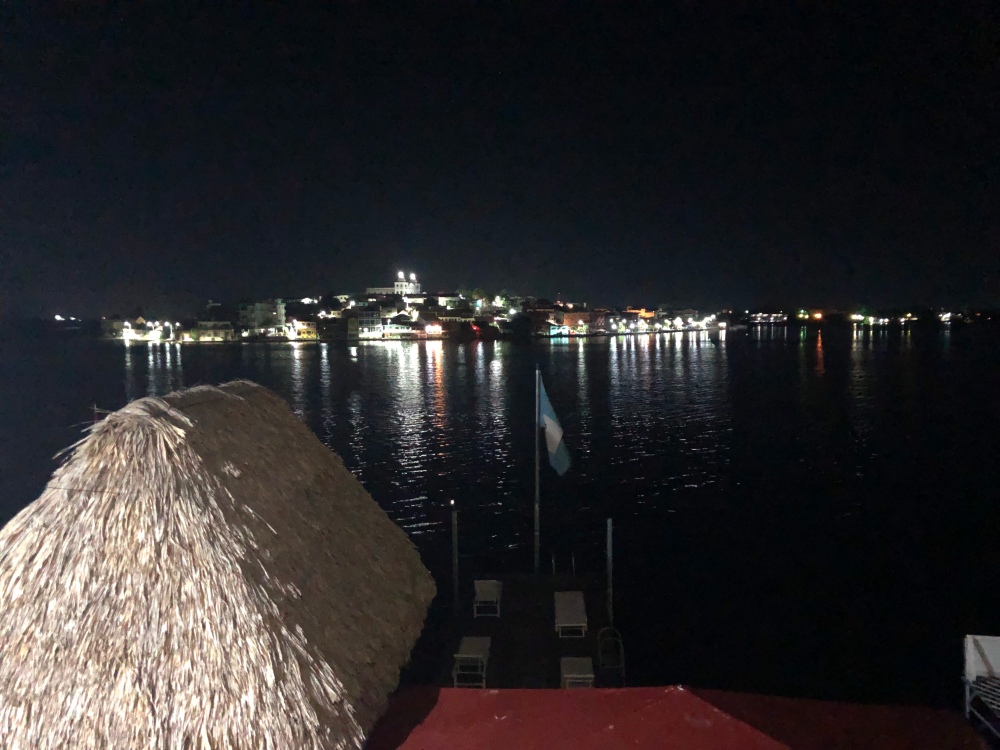 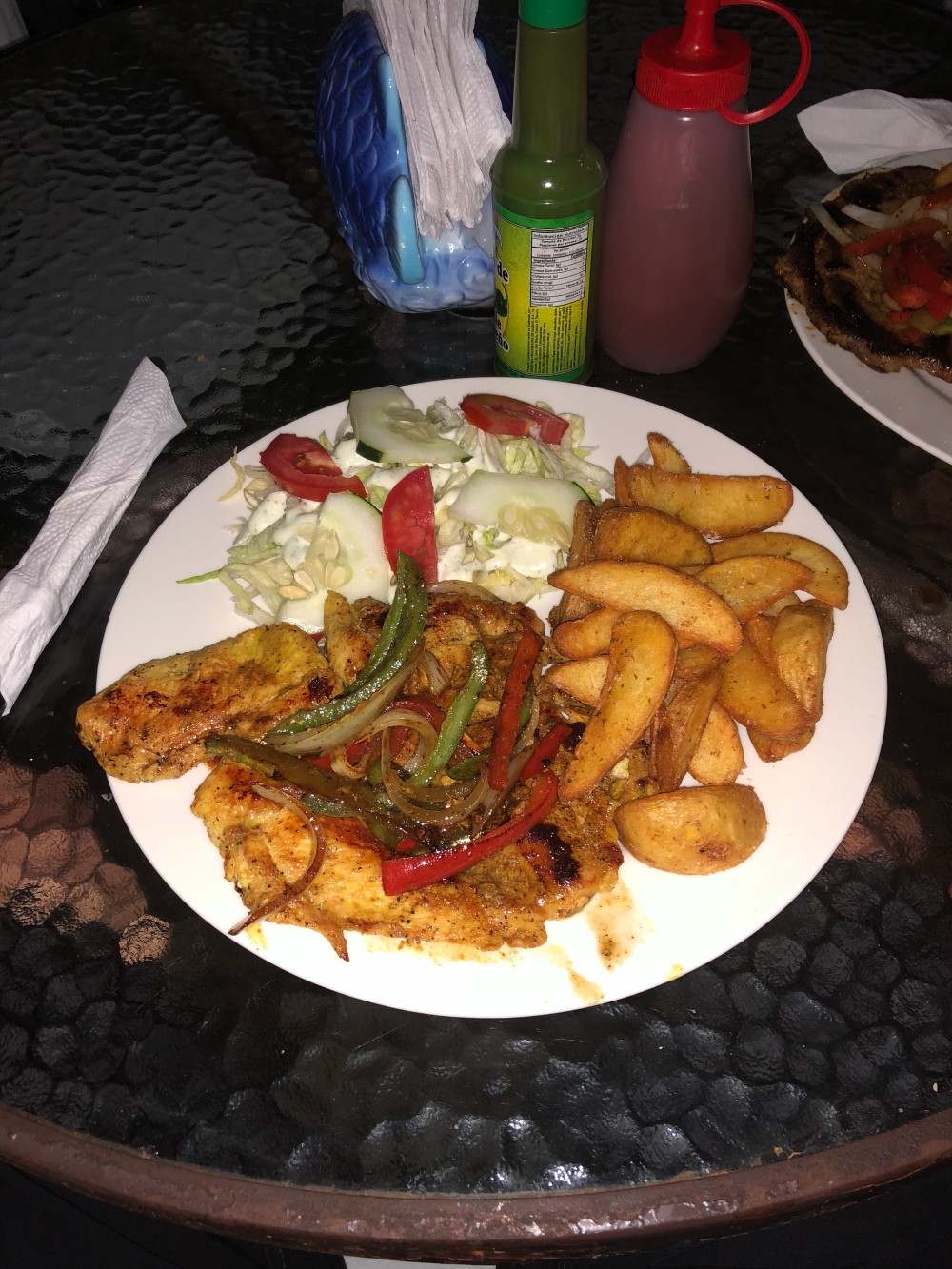 Today marked the last day in Belize. I’m sad to leave this beautiful country. I ended up spending almost 6 days here when I had originally intended to only spend 2 in total. For our last day, a decent portion of our hostel chose to do the ATM maya cave tour. Clay and I booked it at the last minute the night before from a street vendor while waiting for our food to come. Luckily, the agency had two extra spots open so it worked out perfectly. The other people we knew booked the tour through the hostel instead, so this morning we all thought we’d be in separate groups. Coincidentally though, Clay and I got picked up by a van carrying almost everyone from our hostel so it was rather funny. We had six people in our group, four of which were French Canadian. They were really nice but spoke in French most of the day so Clay and I couldn’t really understand them. It was a little frustrating but I question whether or not it’s my own fault for not being fluent in more than one language. We in America are somewhat spoiled not having to learn more than one language. Most other countries start learning multiple languages early in their schooling because they don’t have that privilege. I almost see it as a weakness of mine because every European I’ve met so far speaks at least 2-4 languages.

Sorry for the digression. The tour was absolutely amazing. The ATM cave is a 3.3 mile long system that was used by the Mayans for sacrificial purposes. Most of the pottery found in the cave has been dated between 750-980 AD, which was the time period where Central America faced extreme droughts. Archeologists think that the Mayans believed caves were holy portals into the underworld. Caves were also thought to be the home of the rain god. Pottery was littered everywhere inside, mostly shattered into many pieces. The Mayans actually did this intentionally to mimic the sound of rain. They also played drums to mimic thunder and scratched flint to mimic lightening. Mayans typically sacrificed people of high status or royalty as this would ideally appease the rain god more than sacrificing just a commoner. The ATM Cave is one of the top ten cave systems in the world. It wasn’t even fully explored until 1986 when a British archeologist and his team spent three years mapping out the system. It opened for tours in the early 2000’s.

We started by hiking 1.4 miles into the jungle across three different rivers. This trail led us to the mouth of the cave. The opening wasn’t nearly as large as the Rio Frio Cave from yesterday, but the entrance was still cool. It had crystal clear deep water that each of us jumped into one by one. We proceeded into the cave using our provided headlamps. As nice as it was to have lights, it still didn’t stop us from banging our shins and knees on rocks. But hey, that builds character. Many of the pathways were very small and forced you to climb or go underwater. Our guide was a young guy who had been spelunking for 17 years in Belizean caves. He also owned all the gear the various companies were using, so he was full of knowledge. He wanted to move fast so we passed most of the other groups early on. This prevented us from waiting in line for the most popular spots in the cave.

After learning about the various types and purposes of the pottery, we moved onward towards the human remains sites. We discovered that sacrificed were conducted not only to appease the gods, but also to form alliances between people. One Mayan would strike a blow to a victim’s head and then decapitate him in front of his enemy. This would confirm that the two Mayans support one another via a blood bond. Victims were typically bound by hands and feet and dragged through the terrain. There were many different methods of sacrifices—beheadings, amputations, live surgeries, disembowelments. Our guide took us to these two rooms known as the Big Room and Angel’s Den. To no surprise, the Big Room was a big room reaching 120 feet high. After Angel’s Den, we went to the spot where an entire skeleton has remained calcified for over 1000 years. At first I was really skeptical. I figured this was just some BS tourist trap placed there in the 2000’s. However, after seeing it for myself, I believe it is real. The remains were from a male sacrifice believed to die by live surgery. His left knee, back, jaw, and left hands were broken or cut off. His back and pelvis were twisted. I don’t know who that guy was, but he died a terrible death. Next we saw the remains of a child believed to be anywhere from 7-14 years old. This one was clearly a Mayan kid because it had formed head. Mayans ties boards to children’s heads in infancy to shape their skulls in particular ways. The aim was to make them more attractive, but some just aimed for being different. Beauty was defined by uniqueness.

The last remains we saw were from a man that received a blow to the head and then was pushed off a cliff. This one was really cool because quartz crystals have infused to his skull over time making the piece one flashy relic. Soon after, we made our journey out of the cave. This is when our guide decided to have some fun with us. He led us through very small openings forcing us to crawl & shimmy our way through. He told us all to hush, then asked us to turn off our lights. Suddenly, the whole cave was completely pitch black. It was surreal. We walked the next 20 or 30 kilometers with no headlamps. Everyone was walking so slowly because we were all afraid of what was ahead. All of our voices echoed deeply at this moment, too. It was really cool. Finally, we reached the end of the tour after hiking 1.4 miles back across the river.

Next we had lunch at the at the end of trail. Our guide made us rice and beans, these astounding mashed potatoes, and some Belizean chicken (plus a few Coronas). The chicken in Belize comes with this runny gravy that adds an exorbitant amount of flavor to the rice. I had something similar the night before at a restaurant but it was not quite as good. Oh, and we had some fried plaintains. I will miss those things dearly back in the states. Our journey back to the hostel wasn’t long but sure felt like it. At one point, all of us were asleep. The roads in Belize made sure our naps were short and sweet though.

Clay and I returned to the hostel and waited for Ramón. Unfortunately, Ramón chose to stay another night in San Ignacio so Clay and I had to leave without him. We also had to part ways with Charlotte and Liza. It was sad because all three of these lovely people brought amazing personalities to our little impromptu group. We caught a taxi to the border and then went through customs quite easily. We hassled with a private taxi driver for a little while and then took it direct to Flores. Somewhat unexpectedly (at least for me), four armed police officers had us pull over about 5 minutes into our drive. They asked us for our passports but mine was in the trunk, so they used Clay’s. After a few minutes, they signed over Clay’s entrance stamp and allowed us to proceed. Apparently this is customary but it sort of caught me by surprise.

We arrived in Flores around 8 PM and caught a ferry over to our hostel called Casa de Grethel. Every hostel has a different atmosphere in addition to the various people you meet within them. This one, in particular, has a home-like feel. It’s a giant mansion with dorm rooms in it. Our room has these weird blue and red lights in the ceiling. We’ve decided that this was the master suite at one point. The best part about this place so far is the food. It’s extremely cheap ($4-5 USD) and muy sabrosa. Sorry I don’t have any videos of the cave tour—they didn’t allow cameras. It actually would’ve been quite impossible to carry a camera anyway. Tomorrow I leave for Lanquin, Guatemala. We will be leaving at 8 AM for an 8 hour bus ride. Check out El Retiro Lodge. That’s the hostel booked. It has a river running right through it. It’s very close to Semuc Champey, which is one the areas I’ve been most excited about for this trip. Tomorrow I will write my post about the visit to Tikal during the bus ride. Thank you all for reading!!! I’ve been so amazed by all the support.

Countries I Have Met People From: